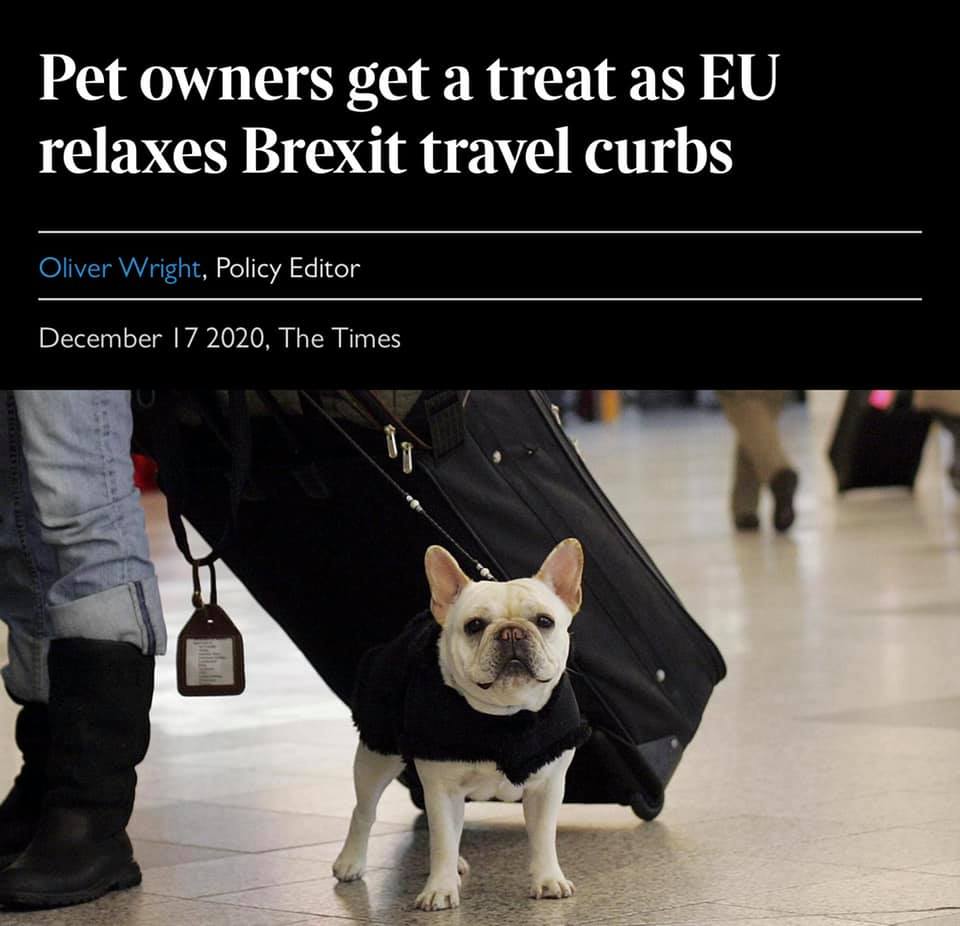 Pet owners will find it easier to take their cats, dogs or even ferrets to Europe after Brexit following an eleventh-hour concession from Brussels.The European Commission has relaxed restrictions due to come into force on January 1 that would have forced pet owners to plan any trip to the Continent three months in advance.Instead Britons will only need to visit a vet and get an animal health certificate to prove that their pet has had a rabies injection, no more than ten days before travel to the EU. The regulations are applicable to dogs, cats and ferrets, which are susceptible to the disease.The move will take effect even in the event of a no-deal Brexit. Ministers are pressing the EU to go further and remove the need for a health certificate altogether — allowing pets to travel under the present pet passport scheme. The new rules will apply between Britain and Northern Ireland.The threat to pet travel could have led to whole families being turned away at EU ports if they did not have the correct paperwork. The animal health certificate is expected to cost about £60 — similar to the pet passport. This can be used for travel between EU countries for up to four months.A spokesman for the Dogs Trust charity urged pet owners to make themselves familiar with the new rules. “Dogs Trust encourages pet owners to thoroughly read the government’s guidance to ensure that they’re not caught out with the incorrect paperwork when wishing to go to Northern Ireland or the EU with their dog,” he said.Andy Handley, chairman of the British Ferret Club, said that while there was not huge cross-Channel ferret traffic it would be welcome news for some breeding programmes. He said: “There is a trade with Andorra, which would be affected so anything that reduces the bureaucracy is welcome.”Ed Hayes, policy and public affairs manager at the Kennel Club, said that they welcomed the announcement because it gave certainty to pet owners. However, he added: “We are disappointed to discover that, from January, now just a few weeks away, owners will need a health certificate and rabies inoculation to travel to Northern Ireland from mainland Britain, which will make travelling to Northern Ireland very difficult for those with dogs, or anyone involved in canine activities.”

Great Britain Extends The Suspension Of Commercial Imports Of Dogs, Cats & Ferrets From Belarus, Poland, Romania & Ukraine Until The 3rd Of September